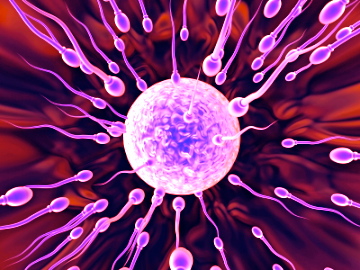 Besides getting the woman ready for pregnancy, there are also acupuncture treatments for the male to improve total sperm count, motility and morphology.  It also beneficial to those with low morphology and doing ICSI (intra-cytoplasmic sperm injection) which surgically injects the sperm which contains all the chromosomes directly into the eggs seemly independent of total count, motility and morphology.  But a successful pregnancy requires more than a successful fertilization.  Survivability is highly dependent on the quality of the sperm.   A better sperm will generally have a better morphology (shape) which reflects how well the chromosomes are packed in the head of a sperm.   In general, a better shaped sperm will have better physiological functions and expressions than a poorly formed or shaped sperm.   It logical to assume that a good looking sperm will be have better DNAs and will result better embryos.  Less miscarriages. The main contributing factor to infertility from male is the sperm quality and quantity.   High quality of sperm is extremely important for those couples who are trying on their own or with artificial insemination (IUI).  Even if one uses ICSI , having a large pool of high quality sperm implies that the environment in which the sperms were developed are more favorable, thus it can improve the chances of  having the best sperm to be chosen for injection.

The three major factors in analyzing sperm quality are: Total count, Motility, and Morphology.
The total count should be greater than 40 to 60 million;  Motility greater than 50%; Morphology greater than 30%. WHO. (>14% Strict).
With acupuncture, Dr. Lee has helped many male patients to improve their total sperm count ( from 1m to 10 million in 12 acupuncture treatments), sperm motility (up 72 % in two months), sperm morphology (up 37 to 50% in 2 to 4 months).

–A 32 y.o. female tried and failed to conceive for 18 months  including 2 natural IVFs and 1 mini IVF prior to seeing Dr. Lee.   She came for evaluation started getting acupuncture and herbal treatments to correct her body’s imbalance from Dr. Lee since mid 12/2015.  They could not try naturally or do IUI in the past due to her husband’s low sperm count, low sperm motility and low sperm morphology.  Since a healthy embryo comes from combining both a health egg and a healthy sperm. Her husband also decided to get evaluated by Dr. Lee to improve his sperm which will benefit future IVF or may be to a point for natural try.  This process often take 3 to 6 months.  Both of them came to get acupuncture treatment weekly and take herbs and keeping the diet that was tailored to each of them. In March 2015, she was happily found out that she was pregnant naturally.  Her husband’s sperm count increased from the pre-treatment of 7M/ejaculation to 174 M/ejaculation 3 month after treatment.  Sperm motility increase from 25% to 39%.

A 31 year-old male had been trying to conceive naturally with his wife for 9 months with no success.  He had his semen tested in Dec. 2013 which showed low count of 8.4 million (normal => 40 million), low motility of 4.6 million (normal = > 20 million) and low morphology of 0.32 million (normal = > 5.6 million strict).  He came to see Dr. Lee in Jan. 3, 2014 and after finding out his imbalance, he received acupuncture and herbal treatments for 4 months.  A new semen analysis was done on 5-5-2014 and showed drastic improvements.  His sperm count went up to 77 million (9x more), motile sperm went up to 27 million (6x more) and normal morphology went up to 1.54 million (5X more).  The best news came in the same month when his wife, who also had been getting treatment from Dr. Lee, reported that she was pregnant naturally on 5-17-14.  She finished her weekly treatment to prevent miscarriage and was discharged on 7-9-14 at week 12.

A young couple, (male 32, female 34), has been trying to conceive for 2 years without success. His semen analysis done in July 2012 showed normal count of 107 M per ejaculation, low motility of 37% and very low strict morphology of 1%.  He started getting acupuncture and herbal treatment for Dr. Lee in August 2012.  After 5 months of weekly acupuncture treatment and daily intake of herbs, his wife convceived naturally in Feb 2013.  A healthy boy was born later in the year.  He was about to do a semen analysis when his wife tested positive for pregnancy which was the ultimate semen analysis.

A 49 year old physician and his wife, 34, had been trying to conceive for one year naturally.  His wife also tried 2 cycles of IUI without success.  His semen analysis done in Feb 2011 showed 32 M sperms per ejaculation, 14 M sperm swim in circular motion with no forward moving sperm and 0.32M (1%) sperm with normal strict morphology.   Both of them started acupuncture and herbal treaments with Dr. Lee in early Dec. 2011.  4 months later, his new semen analysis done in March 2012 showed 84 M sperm (2.6 X increase), 46 M sperm moving moderately forward and 2.5 M sperm with normal strict morphology.  His wife conceived naturally in March 2012.  A healthy baby was born later in the year.

A 41 year old male with low sperm count of 14 M sperm per ejaculation 5.6 M sperm moving in either in circular motion or moderately forward and 1M normal strict morphology.  He started acupuncture and herbal treatment with Dr. Lee in April 2012.  After 4 months, a new test showed count increaed to 23 M (still low).  But, his sperm motility has increased from zero to 4.5 M in the category of rapid forward moving sperm.  There is also 19% increase in normal strict morphology.  2 more months later, his wife conceived naturally in Oct. 2012 which was 6 months after he started seeing Dr. Lee and one month before the start of IVF cycle.  A healty boy was born the summer of the following year.

The 44 year old male patient described in 2007 update, took a year off from treatment with Dr. Lee in 2010.  He restarted with herbs from Dr. Lee in March 2011.  In June 2011, his wife conceived again naturally for child #3 after failing five cycles of IVF.

Here is his email to me:

The 44 year old male patient described in 2007 update, wished to have a second child. But, after the taking a year of break from acupuncture and herbs, his sperm count dropped to 6.8 M in Jan 2009.  He restarted his treatment with Dr. Lee again in late Jan 2009.  4 months later, his wife got pregnant naturally again for child #2.  The same wife that had failed 5 IVF previously.

The 44 year old male patient described in 2007 update, continued his acupuncture and herbal treatment with Dr. Lee until his wife was 12 week pregnant.  His semen analysis done in Feb 2008 showed normal count of 57M, 50% motility and 20% strict morphology.  His wife gave a birth to a beautiful and healthy girl in the Spring 2008.

A 44 year old male patient had an abnormal semen analysis with 0.58 million sperms per ejaculation, less than 1% motility, and 0% WHO morphology in June 2005.  He and his wife ( in her early 30’s then) had been trying to conceive for 2 years without success despite of 2 IVF cycles. He started with Dr. Lee on 2/8/06.  On 3/20/06, his sperm count had tripled to 1.55 million, with 10% motility and 19% WHO morphology.  By June 06, the count had went up 9 fold to 14 million, motility up to 20%, morphology to 18%. He stopped acupuncture treatment because his wife’s RE thought the that the sperm was good enough for IVF.  For 5 months, while he was only on the herbs, his wife did 2 more IVF cycles with a different RE.  IVF #3 failed.  IVF#4, was ended with chemical pregnancy.  His semen analysis done on 2-6-2007 showed a drop in count (4.9M), motility (17%). The morphology was (7% strict, no prior strict to compare).  He returned for more acupuncture in Feb 2007.  His wife did IVF #5 in May 2007 which also ended in chemical pregnancy.  But, he continued on with his acupuncture and herbs. In August 2007, his wife after failing 5 IVFs, was able to conceive naturally with her husband sperm.  One month later, he banked sperm. The cryopreservation report showed 30.4 M sperm with 50% motility.  (Nine months later, they had a healthy daughter).

The lesson learned: It is import to have better sperm to combine with eggs.  One can pick a sperm in a poor sample to inject into an egg.  But, it is hard to have a child with that kind embryo.  A better sperm parameters will increase the chance of having better embryos.

Here are some case study reports on Acupuncture for Male Infertility from China
(please note fertility labs in China consider a total sperm count of less than 110 million/ejaculation to be abnormal.)

In a group of 160 patients, all have over a year history of infertility due to sperm deficiency.   Tests showed that their sperm count was less than 60 million, motility less than 60%.  After acupuncture treatments for infertility, 125 patients considered cured, with a sperm count of over 60 million and motility over 60%.  In 33 cases there was marked improvement with an increase in sperm count and motility.  In 2 cases there was no change.  All in the first group were considered cured.   74 women are pregnant.
Journal of Chinese Acupuncture 1984

There were 248 patients who have male infertility.  After acupuncture treatments for infertility, 89 were cured, 77 made major improvement and 85 cases no change.
Journal of Chinese Acupuncture 1987.

In a study of 45 patients, after acupuncture treatments for infertility, 22 were cured, 13 improved, minor improvement in 6 cases, and 4 cases no change.
Journal of Chinese Medicine in Tianjin 1988.

145 of male infertility received acupuncture.  96 cases improved with a sperm count of 70 million/ml with motility greater than 60%, amorphous of less than 15%.  35 made improvement and 14 patients had no change.
Journal of New Chinese Medicine 1988